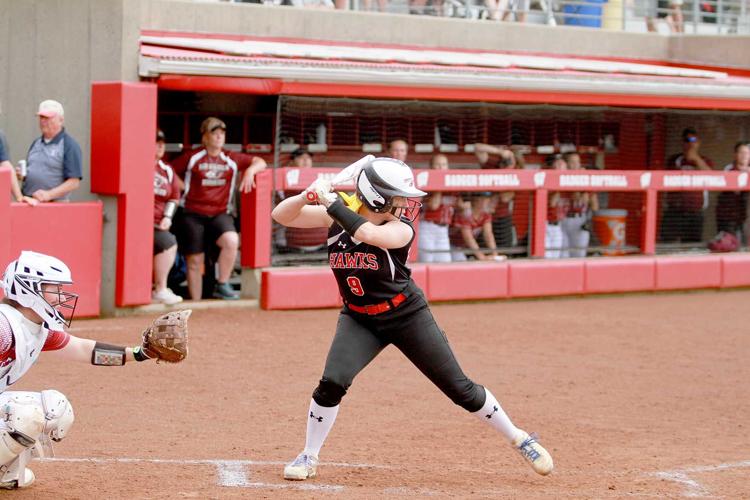 Trinity Mittl at the plate during the state semifinal game. 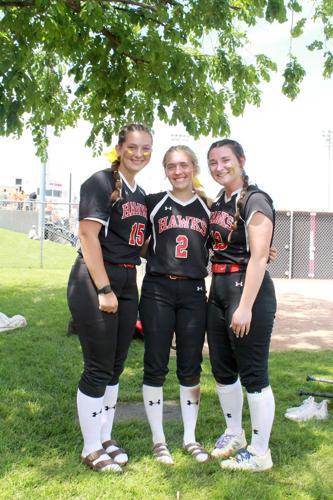 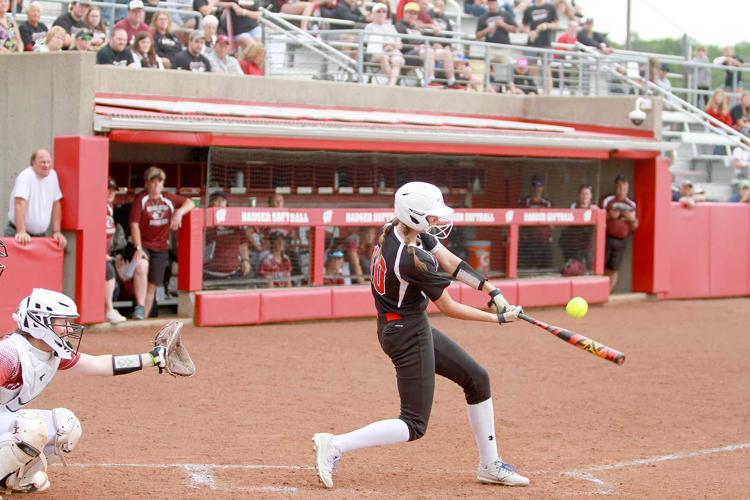 Jordyn Letter connecting on a two-run homer in the bottom of the sixth inning during the state semifinal.

It was a start no one associated with the Baldwin-Woodville softball team anticipated.

Three batters into the Division 3 state semifinal against New Holstein, the Blackhawks found themselves down 1-0. The Huskies tacked on another run in its first inning and New Holstein was off and running.

The Blackhawks never got closer as New Holstein took the semifinal 5-2 June 10 at the Goodman Diamond at the University of Madison.

The story of the game from Baldwin-Woodville’s point of view was its defense. Four of the five New Holstein runs were unearned thanks to four Blackhawk errors.

“Without a doubt, our consistent defensive play that we displayed all season was not present today,” B-W coach Tim Klatt said. “When you get to this stage in the playoffs, you certainly have to make the routine plays but at the State Championships, you also have to make some plays that are not routine.

“We also allowed some free passes that contributed to the pressure. At the plate, we didn’t get settled in until the third or fourth inning. Once we laid off that high fastball, we made solid contact.”

A B-W error in the first played a factor in the two New Holstein runs. New Holstein scored another run in the third thanks to another Blackhawk error, but that run was earned.

The Huskies stretched its lead to 4-0 thanks to another unearned run in the fourth.

The lack of a timely hit also hurt B-W’s chances. In the first, fourth and fifth innings, B-W started its inning with a double. None of those runs scored.

“Some of that’s on me,” Tim Klatt said. “I could’ve put our girls in better positions earlier to move those runners over. I know in the first, I didn’t communicate that properly.”

The fifth inning was B-W’s best chance out of those three. Hailey Cota started the inning with a double to right center and advanced to third on a Marney Roemhild groundout. Brooke Klatt was then hit by a pitch. Natalie Ziebell then retired Morgan Smetana on a pop out to the catcher and Trinity Mittl on a flyout to right field.

Baldwin-Woodville got on the scoreboard in the sixth inning. Kate Groskreutz singled with one out and Jordyn Letter, playing in her first game since April due to injury, hit a two-run homer to left. Hailey Maurer reached on a Husky fielding error, but Ziebell ended the threat again.

New Holstein scored its final run in the seventh on another Blackhawk error.

“That seemed to take the life out of the Hawks momentum,” Tim Klatt said.

Ziebell then retired the Blackhawks in order in the bottom of the seventh to end the game.

Ziebell struck out seven and walked one to earn the win. She gave up seven hits.

New Holstein advanced to the championship game, losing 5-3 to Poynette.

Kate Groskreutz led B-W (19-6 overall) with two hits, while Roemhild, Smetana, Ryeah Oehlke and Cota had one hit each.

Smetana struck out nine and walked five in a losing effort. She gave up five hits and only one earned run.

“It’s never easy when a season comes to an end, especially with a group that had expectations of achieving what they were unable to last season,” Tim Klatt said. “They experienced Goodman Diamond and for that, I’m thankful. Every B-W girl that plays down at Millpond Park in 10U, 12U and 14U, dreams of playing on this field. Not bringing home the gold ball, yes, it’s a little disappointing but there is so much more to high school sports.

“Not many kids get to play at this level, reaching a state tournament. I couldn’t be more proud of these girls. Regardless of what happened in this game, we don’t get here without each of them contributing throughout the season and certainly in the playoffs. For the seniors, they’ve accomplished a lot on the courts, the fields and classroom. They’ve made great memories. As I told each of them, they will go onto accomplish much more in the years to come.”

B-W will graduate Brooke Klatt, Smetana and Groskreutz from next year’s roster.