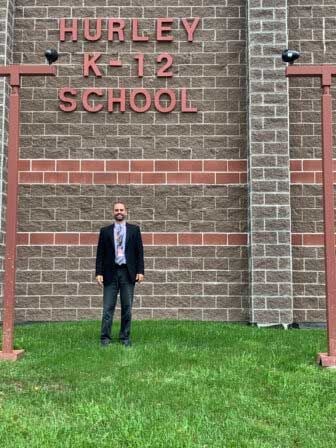 Kevin Genisot, superintendent of the Hurley School District in northern Wisconsin, says the decision on whether to reopen schools to in-person instruction has become very contentious. “This is a much different conversation with the community now than it was in March. It’s turned vastly more political than ever … No matter the decision we make, people are upset,” says Genisot. Hurley plans to bring students back to school — but is poised to switch to virtual learning if the virus intensifies. 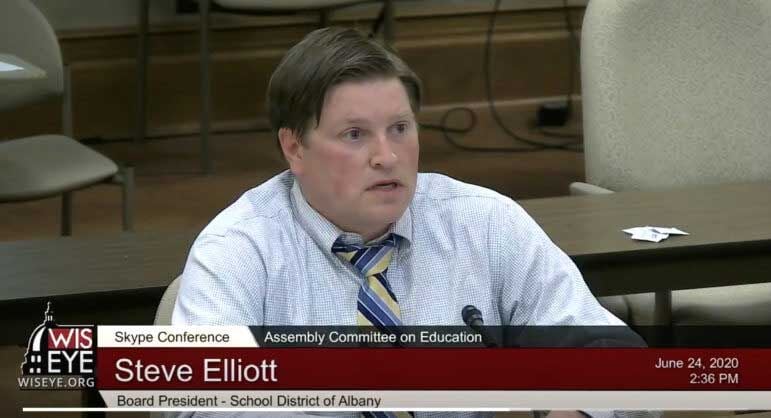 Kevin Genisot, superintendent of the Hurley School District in northern Wisconsin, says the decision on whether to reopen schools to in-person instruction has become very contentious. “This is a much different conversation with the community now than it was in March. It’s turned vastly more political than ever … No matter the decision we make, people are upset,” says Genisot. Hurley plans to bring students back to school — but is poised to switch to virtual learning if the virus intensifies.

Schools in Wisconsin have spent millions of dollars on hotspots to help students with poor internet service learn online as the coronavirus pandemic grinds on.

The 40-acre farmette where the Hellenbrand family lives in south-central Wisconsin is an eclectic mix of people and animals.

Amy Jo Hellenbrand and her husband raise corn, soybeans, wheat, heifers, chickens, goats and bunnies on their land just outside the village of Dane, about 20 miles north of Madison.

“We do have a little petting zoo,” she said with a chuckle.

They also raise four children — ages 11, 9, 8 and 5 — and up to five more children attend her home day care at least for part of the day.

That made this spring particularly challenging, when the pandemic forced schools across the state to close. Mirroring the rest of Wisconsin, education for the Hellenbrand children relocated to their kitchen table, and Amy Jo and her husband Andy were in charge of making sure their children tended to their school work.

That task was made even more difficult by sluggish internet service that only further slows when the family nears monthly data limits.

“It was wild, it was chaotic, stressful,” Hellenbrand said. “I broke out in hives because of the stress and anxiety. I was on steroids for a while.”

The 44-year-old mother thinks children need to be back in school — at least part-time.

But the Lodi School District, where the children attend, decided in July to provide schooling virtually through at least November. That’s going to make life tough for the Hellenbrands.

About 30 miles west of Madison near Blue Mounds, Matt Millar also struggled with the pandemic that sent his three children — ages 10, 7 and 5 — back home during the school day. Millar himself works from home as a data scientist, and he doesn’t have a lot of extra time to manage his childrens’ education.

“There were many days where I didn’t get one of the kids onto their class Zoom on time, or at all,” Millar said. “It wasn’t going to happen. There’s three of them.”

The 43-year-old dad and the children’s mother — who split custody — are now trying to decide what to do in the fall. The Barneveld School District, where the children attend, is planning to fully open to in-person instruction.

Millar is considereding sending his children to school for the first couple of days so they can meet their teachers and classmates, then pull them out. His own analysis suggests the school district’s in-person plan has a 20% chance of success.

to class for just a few days and then return to virtual schooling. He believes the risk of contracting the virus will increase the longer in-person classes are held.

Instead, Millar is considering “podding” — finding a few other families to pool together and hire a teacher to educate a smaller group of children, one-room schoolhouse style. But finding other interested families has been difficult. His ex-mother-in-law may homeschool them instead.

The chaos and uncertainty for working families like the Hellenbrands and Millars extend across the country. But the prospect of virtual schooling is particularly daunting for rural families in Wisconsin, a state where 43% of rural areas lack broadband coverage — far below the national average of 31%.

On Sept. 1, when many Wisconsin public schools reopened, some offered online-only instruction to avoid spreading COVID-19.

State law in Wisconsin allows each school district to determine the operations of their buildings and their learning environment, State Superintendent Carolyn Stanford Taylor said in the state’s pandemic education plan. A final tally of which form of instruction each district chooses will not be available until early September.

How well these efforts will go in rural areas with slower internet or spotty cellphone access — or urban schools where students can’t afford high-speed hookups — remains an open question.

Not all rural areas equal. The Millars are fortunate to have excellent internet service at their rural home. That makes their choice to keep their children out of school easier.

But the Hellenbrands are more typical for Wisconsin families who live in the country. They rely on a sluggish DSL connection, essentially an ancient technology compared to what many urban areas have.

The family also must live with data caps, another aggravation very familiar to rural areas. As they near limits towards the end of the month, the connection slows even further so they don’t exceed the cap.

Before the pandemic, the state estimated that about 15% — approximately 130,000 children — lacked broadband access, said Kurt Kiefer, an assistant state superintendent for the Wisconsin Department of Public Instruction who focuses on technology in schools.

Congress’ $2 trillion CARES Act stimulus in March infused U.S. schools with funds to move to all-virtual schooling in the spring. Wisconsin schools got more than $200 million of that. A top expenditure was buying a mountain of hotspots, hockey-puck shaped devices that beam wifi into the home using cellphone networks.

That school splurge on technology cut down the rural broadband have-nots significantly, Kiefer said. The state now estimates that 5% of students — about 45,000 — still lack access to broadband in part because hotspots don’t work in areas without cell coverage.

A survey of school districts released in June by the Wisconsin Educational Media & Technology Association reported that 64% said parts of their district lack broadband or cellular access, and 37% said they were unable to provide hotspots or wifi cards.

Steve Elliott, a father of three children and president of the Albany School Board, highlighted this problem when he testified before the state Assembly’s Education Committee in June.

In an interview, Elliott said that during the pandemic, members of his family sometimes had to work from his wife’s cheese shop, Landmark Creamery in Paoli, to get effective internet access. In his testimony, he asked lawmakers to continue to expand rural broadband.

“Our schools are dependent upon infrastructure that doesn’t exist,” Elliott said.

One strength Wisconsin schools have amongst a wave of problems is the universality of personal devices. Many already had supplied Chromebooks or tablets for their students, at least the older ones.

Before the previous school year, more than 80% of the state’s 421 school districts reported being able to deliver education to every student via his or her own laptop or tablet, so-called 1:1 technology. And school districts bought new devices in the spring to cover the students who didn’t have their own.

The amount of personal devices in public schools is “a huge advantage over even four years ago,” said Richard Halverson, a University of Wisconsin-Madison education professor who researches education technology.

“One-to-one student computer initiatives would be in the newspaper four to five years ago, but now they’re pretty common,” he said.

For students without good-enough internet, or those too young to learn on screens, school districts made Herculean efforts to deliver paper homework packets, often by school bus. Many of those packets were delivered with meals. School districts delivered nearly 7 million meals — breakfast and lunch — in the spring after the pandemic started.

But the situation on the ground is constantly changing. The tiny school district of South Shore in Port Wing on the shore of Lake Superior is planning to welcome all of its 179 students to school because it has the space to socially distance. Its classrooms were built for 30 students, and the largest class in the district has 18, Superintendent Clendon Gustafson said. Its 2020 graduating class had seven students.

There cannot be just a plan A and plan B. Despite the pressure from all sides, many Wisconsin school districts will be basing their decisions, now and in the future, on the prevalence of the virus. Even those districts planning to come back fully to in-person instruction say they must prepare for a spike and a return to virtual teaching.

Some parents will keep their children home no matter what and will need instruction. Those without internet access will need paper packets delivered to them.

“We don’t just have a plan A and a plan B,” said a La Farge teacher who sits on her school district’s pandemic planning committee. “We’ve got a plan A through double D for everything that could possibly happen — hopefully.”

The disaster of the pandemic and teachers’ scramble to adapt may turn out better than expected, Halverson said.

“I don’t want to say a catastrophe is a blessing, but there are going to be so many teachers who are now going to become aware of the power of digital tools to extend their teaching,” he said. “But it’s going to be a hard fall. That’s just a small benefit from a really tough situation.”

In the meantime, students, parents, teachers and administrators must muddle through.

Ten-year-old Adara, Matt Millar’s oldest, said she sometimes struggles to focus while staring at her iPad for school. She and her brothers break up the screen time with recesses on their tree swing, trampoline and rock-climbing wall — some of the perks of country living.

They miss going to school, seeing their teachers and goofing around with their friends. But Adara worries about bringing COVID-19 home to her family, especially her grandparents.

Virtual schooling can be tough, Adara said, but it has taught her at least one big lesson.