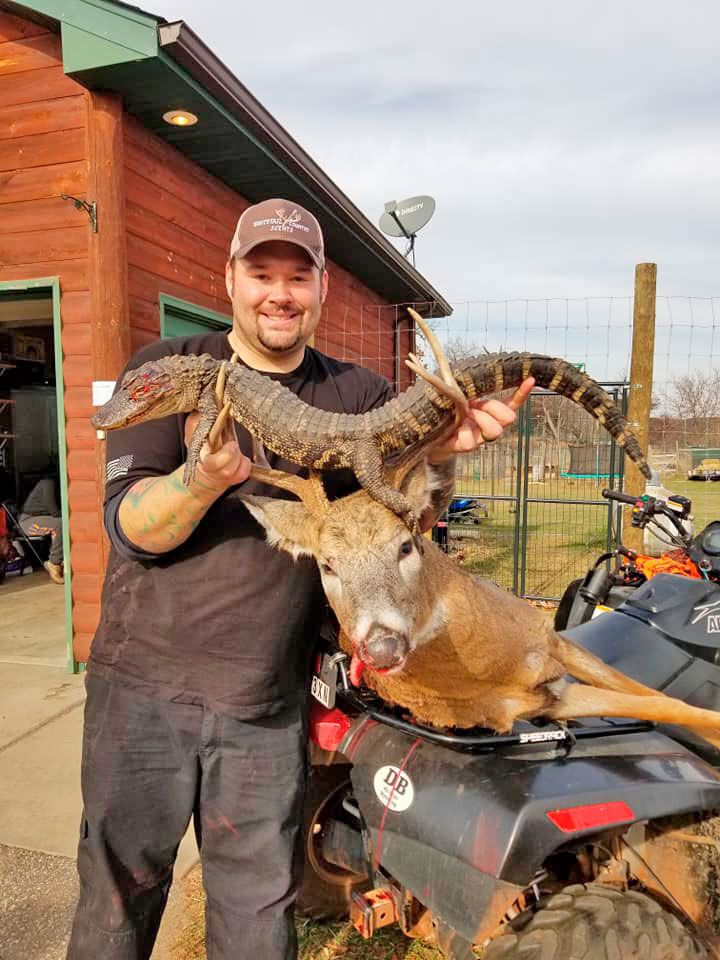 More than hunter bargained for

Minnesota hunter, Corey Klocek bags a buck on opening day. His venison came with a side of gator. See story page 7. 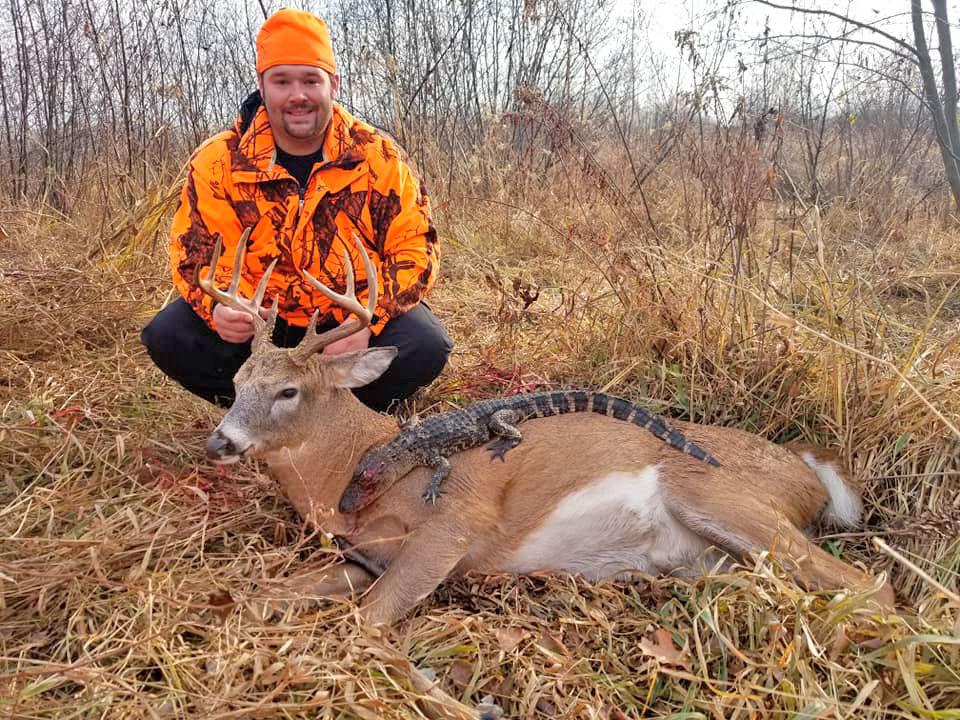 Corey Klocek is shown with his 10-point buck and 3 foot long alligator catches from Minnesota’s gun season deer opener. Klocek plans to mount them together.

More than hunter bargained for

Minnesota hunter, Corey Klocek bags a buck on opening day. His venison came with a side of gator. See story page 7.

Corey Klocek is shown with his 10-point buck and 3 foot long alligator catches from Minnesota’s gun season deer opener. Klocek plans to mount them together.

As Baldwin, Wisconsin hunters prepare to bag the “Big One” this upcoming gun hunting season, a Baldwin, Minnesota hunter shared his story of an interesting opening weekend.

The second week of November is always special for Corey Klocek. The Army vet celebrates Veterans Day, his birthday and of course, gun season deer opener. This year proved to be extra-memorable. If Klocek thought 2020 had been a strange year, shooting both a buck and an alligator on the same Minnesota day was the icing on the cake.

Klocek resides in Baldwin Township, just outside of Zimmerman, MN. He has been a hunter for as long as he can remember. “I remember being a little boy and running around the woods with a little BB gun while the rest of my family was bird hunting,” he said.

Klocek said he has enjoyed hunting for various reasons. “When I was a kid hunting was about being with my family. As I got older, after spending three years in Iraq and 13 years in the Army, it became about relaxation. It gets me away from the hustle and bustle. I can go out there and clear my mind and be at peace with nature,” he said.

Although the morning of hunting opener was different than most in the past, it did not start out all that unusual for Klocek. Because his dad had tested positive for COVID-19, he decided to hunt with a different group that day. He phoned his friend Lisa Musker, owner of White Tail Country Scents in East Bethel and made the decision to hunt on her property. His blind was still set up on the property from his previous bow hunting.

“We walked out to hunt together Saturday morning. I left Lisa and her granddaughter at her blind and I walked to mine. About 8a.m. a ten-pointer walked about 25 yards in front of me,” said Klocek.

He said he is normally a rifle hunter, but the property he was on was a shotgun zone, which he was more unfamiliar with. Regardless, he took a shot. “I knew I hit him hard, but because I had never used a shotgun on a deer before, I waited a half hour before I went searching for him,” he said.

Klocek followed the blood trail that led to a bean-shaped pond. He said, “The pond is about 10 yards by 20 yards, not very large.” He noticed a spot that lacked the tall grass that surrounded the rest of the pond. In that spot, he noticed something odd. “I thought, ‘Holy cow! That is an alligator,’” Klocek said.

His first thought was that someone was playing a trick on him and had planted a fake gator in the area. “Then it moved and I knew it was real. Being from Minnesota, I didn’t know if it was an alligator, crocodile or some sort of other crazy lizard. From watching the T.V. show Swamp People, I thought it seemed like an alligator,” he said.

He walked away for a moment and spotted his buck about 10 yards from the gator. Next, he called Musker. Klocek said, “We still laugh about that call because it was so unbelievable.”

After convincing Musker this was no joke, Klocek called the Minnesota DNR. They told him he could shoot the gator. He and Musker walked to her farmhouse and grabbed a 22 pistol. On the walk back Klocek called an old Army buddy. “He is Cajun from the swamps of Louisiana. He grew up gator hunting, but now lives in Minnesota. He filled me in on how to shoot the alligator humanely. I pride myself on taking ethical shots and making sure animals do not suffer,” said Klocek.

It took one shot and they pulled it up on shore. “After we were sure it was dead, the photo session began,” he said with a giggle.

Klocek was unsure if the DNR was going to allow him to keep the alligator. It is considered a protected animal. After speaking with Federal Fish and Game, it was determined in Minnesota there are no restrictions as it a non-native species, so they left the decision up to the Minnesota DNR, who decided the alligator was all Kloceks. “The only caveat is because it is protected, I am not able to ever sell it or trade it, which I am o.k. with,” he said.

The gator has been brought to a taxidermist, who skinned it out and returned the carcass to Klocek. “I am doing a full shoulder mount on the 10-pointer. He will be looking down to the right with his ears pinned back like he is ready to bite. The gator will be on a wooden platform surrounded by tall grass, similar to where I found him. He will be looking up at the deer like he is going to snap at him,” Klocek said. It is sure to be a conversation piece.

He is planning to gather with friends and family in the spring to share the gator meat during a Cajun/Louisiana style feast, including a crawfish boil with all the fixings. He said, “I want to honor this alligator. I like to be able to honor the things I harvest.”

The thought is the alligator may have been someone’s pet. There is a housing development 300-400 yards from the farm where the alligator was found. To land where it did, whoever set it free would have trespassed on two different properties. If the gator made the trek on its own, there are multiple ponds that are closer to the development, where it likely would have stopped.

The Opening Day prizes of 2020 will sit at the top of a list of many hunting memories. Klocek said he has always enjoyed his time in the outdoors. Including time spent in Wisconsin with his grandfather, Mike Larson who resided in Amery and his time at the family cabin near Big Trade and Little Trade Lakes in Burnett County.