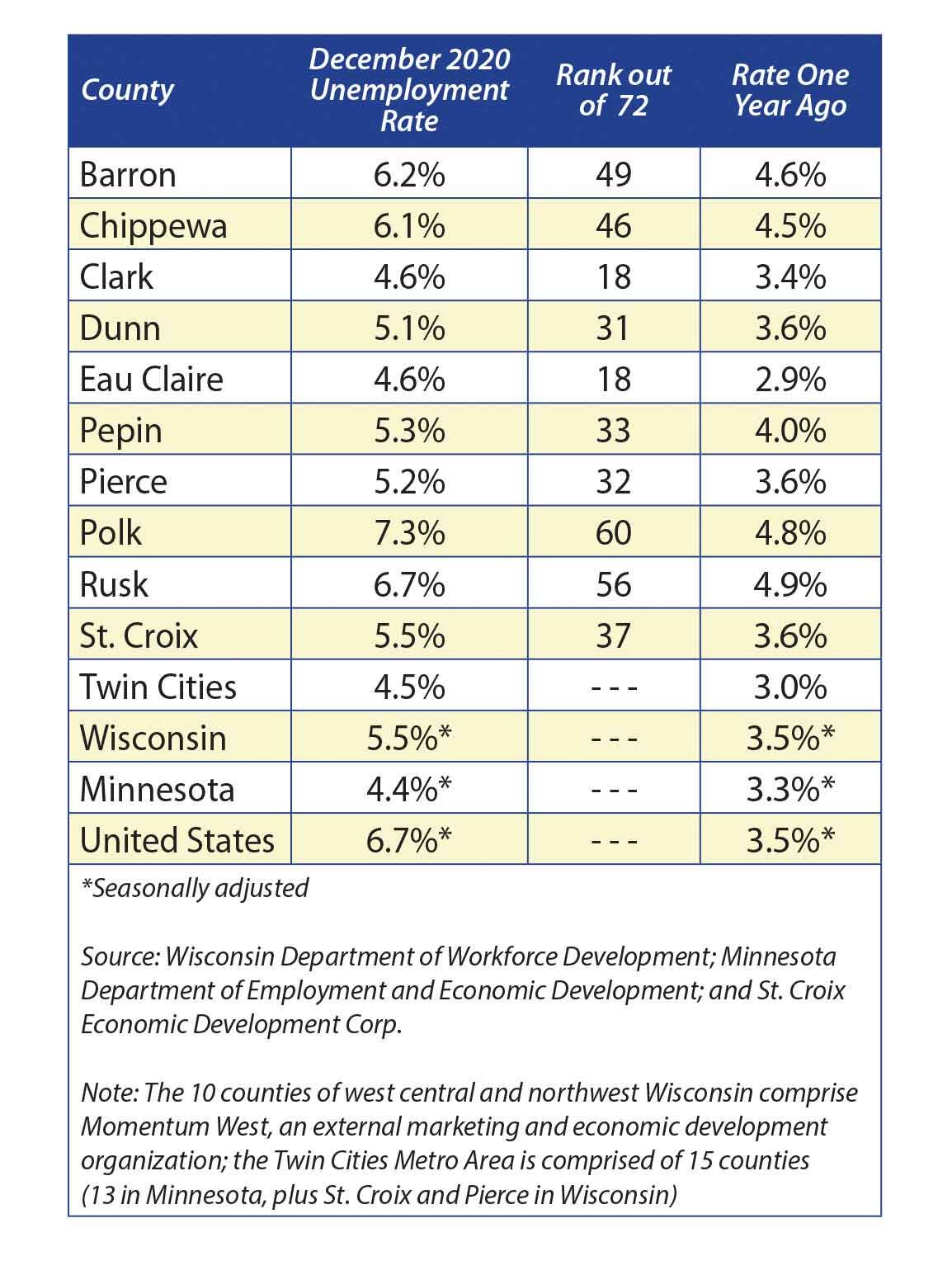 January 27th, the Wisconsin Department of Workforce Development (DWD) announced the preliminary December 2020 unemployment rates for Wisconsin’s 72 counties and the 34 cities with populations greater than 25,000 residents. St. Croix County’s December rate was estimated at 5.5%, which is higher than the final rate of 4.3% for November and October’s final rate of 4.7%. One year ago, the county’s unemployment rate was estimated at 3.6%.

DWD said preliminary unemployment rates from November to December increased in all 72 counties as well as year-over-over. The rates ranged from 3.4% in Lafayette County to 11.1% in Menominee County.

Preliminary unemployment rates declined or stayed the same in three of Wisconsin’s 34 largest municipalities from November to December. Rates ranged from 3.8% in Fitchburg to 8.3% in Milwaukee.

The preliminary (seasonally adjusted) unemployment rate in Minnesota in December was estimated at 4.4%, which is lower than November’s final rate of 4.5% and October’s final rate 4.6%. Minnesota’s seasonally-adjusted rate one year ago was 3.3%.

December’s estimates are preliminary and are subject to revision within the next few weeks.

During the 2021 State of the State Address, Governor Tony Evers called on the Legislature to hold a special session on modernizing Wisconsin’s “broken” unemployment system.

Gov. Evers highlighted that the agency saw an unprecedented influx of unemployment claims during the pandemic, which continue to stress the antiquated system. “We know that replacing this system will take years, that’s why it should’ve been done sooner, but it’s also why we don’t have another moment to waste,” Evers said.

In response to the 2021 State of the State Address and Evers’ call to modernize the unemployment system, Assembly Speaker Robin Vos (R-Rochester) cited Legislative Audit reports showing concerning inactivity on the agency’s part. “These failures weren’t brought on by ancient systems, they were brought on by a lack of leadership,” Vos said.

Since the beginning of this pandemic, there was an unprecedented influx of unemployment claims, exceeding the number of claims even during the Great Recession. Over the course of four years from 2016 through 2019, the Wisconsin Department of Workforce Development (DWD) handled 7.2 million claims. Since March, the DWD received 8.8 million claims alone—1.6 million more claims than the four previous years combined. The Department increased staffing in the Unemployment Insurance Division from about 500 employees to 1,800 employees to answer phone calls, process claims, and follow up with individuals who applied for benefits. During this time the DWD paid nearly 600,000 claimants more than $4.6 billion in unemployment insurance benefits.

Gov. Evers’ plan, LRB-1312/LRB-1430, appropriates over $5.3 million so that the DWD can start immediately working toward modernizing the UI system, without having to wait for the conclusion of the budget process. Of this, $481,700 is for the request for proposal (RFP) process to hire consultants and select a vendor for the modernization, and the remainder is for the initial round of payments under the Master Lease Program. Using the Master Lease Program will help minimize upfront costs while still moving expediently toward upgrades.

Additionally, the bill provides for a potential clawback of state dollars should the federal government provide additional resources to states to fund UI modernization for which this project is eligible. Any federal dollars that are appropriated would need to be used first.

Finally, the bill contains several provisions related to electronic methods for engaging in transactions, such as making electronic communication mandatory, with a good cause exception, and specifically permits the use of electronic records and signatures for UI. These changes will allow for more efficient communication with and service to claimants, employers, and other entities.

Overall, the proposed investment would total approximately $90 million over 10 years toward modernization to provide better, faster services to future claimants and improve the system’s ability to respond to future recessions.