The Oshkosh Plow Truck, a truck from the 1960's which was recently sold from the St. Croix County Highway Department. 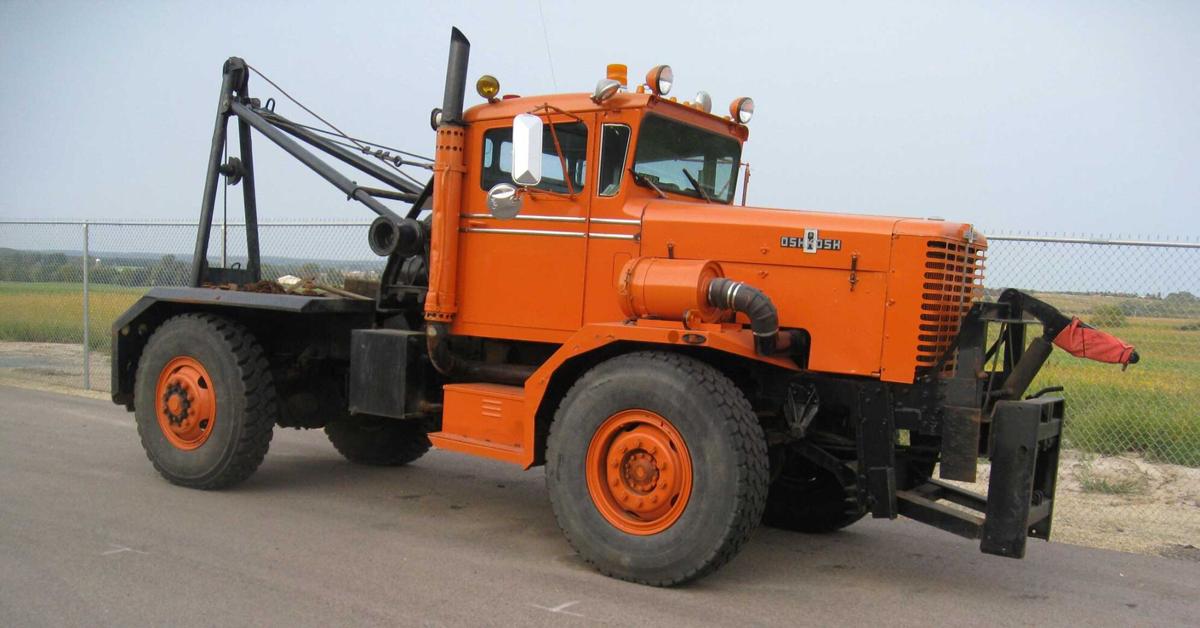 The Oshkosh Wrecker, another longtime truck which was sold

Jim Harer, former Highway Patrol Superintendent had some thoughts and recollections regarding the trucks:

“It is hard for me to talk about the trucks without including the men who operated them. The wrecker was originally purchased as a moving truck/wrecker. The county had always used the single axle rear end so they could be used as a plow truck after wrecker use was done, but moving heavy equipment made the single axle over weight so a tandem truck, (tri-axle) was purchased to take over moving duties. At that point the plow mount was installed from an old retired Oshkosh so it became a wrecker/plow truck. Originally, Vaughn Jensen and I, installed the plow mount and wing post under the direction of welding foreman James Casper but the mount in the picture looks different, no wing post. The wrecker was used many times winter and summer.

The plow truck was new when Charles Vanda was crusher foreman. Duals were installed in the summer so the truck could move the crusher and breaker from pit to pit. This truck was big enough to handle those units. Before that the smaller Oshkosh’s required one in front of the crusher to pull and another one hitched to the back to push and help stop.

An interesting story with that, Charlie was moving the crusher into the Hammond shop, which is downhill. There was no real good radio communication at that time so Charlie had told the back driver, Vern Nelson that if he started slowing down to help push. He meant this for going up hills. Well when going downhill to the shop Charlie was slowing down, so Vern took that for "he should push" and the black smoke was just a roaring out. They did get stopped.

When that truck was needed for plowing snow it was a force to be reckoned with. Duals were replaced with a single wheel and chains mounted. Back in the early 1970s we had a snowstorm that blew just south of Hammond on County Highway T and Charlie Vanda and Vern Nelson opened and widened that stretch. The snow banks were at the very top of the V-plow. The trick the old timers taught me is when you have a large bank like that you have to "split" the drift taking the bulk of the snow to the lesser side requiring you to "buck" through snow bank, which is just brute force. Back then they were called "snow fighters," something you could be proud of.

Interestingly that stretch of County Highway T was built up at that time, so yes that can happen again and when it does the old girl will be dearly missed.

I would like to pay tribute to those "snow fighters" of years gone by that operated that equipment. They put many long hours in year after year under very cold/wet conditions. Everyone from operators to mechanics to office help knew that it was "all hands on deck" when a blizzard hit and they did what was needed to open the roads. Remember that there were no cell phones or the water proof gloves and boots they have today and a good heater in those old cabs was hard to find. Plastic and tape were in standard use just to keep the snow from blowing in. My hat goes off to all of them.”

“These plows were used during a time in history when St. Croix County had the biggest machinery around. They could move unbelievable amounts of snow. Sometimes, the snow drifts were higher than the plows themselves. The snow would pile up on the hoods so high, it covered the windshield. We had skilled machinery operators who knew how to use these plows to their fullest capacity and could maneuver them in ways that made it look easy. It took two guys to run them. One to drive and one to run the wing.

I remember operating the wing with Lloyd Torkelson at the wheel. I would see an enormous drift and say to him, “Lloyd, we’ll never open this road.” He’d respond with a twinkle in his eye, “Oh Nick, we’ll get ‘er. Don’t worry about it.” To my surprise, we always did. We often had to take several runs at it and I’d watch as our tools and other loose items in the cab would fly forward with each ram into the snow. Eventually, it would give way and we would carry on to clear the rest of the road. It was always exhilarating, exhausting, scary and fun all at the same time.

I also remember one time when we came upon a loaded milk truck stuck in the road just after midnight. Emmet O’Connell was running the wing and I was driving. In order to open the road, we needed to get the truck out of the way. We hooked onto the milk truck and got it rocking so that the milk inside the truck began sloshing. Slowly with the help of that sloshing milk we were able to get the truck moved enough to clear the road.

There is something about the rumble of an oncoming snowplow that makes people stop and take notice. I remember the people in the community coming to their windows to watch or kids playing outside standing still in awe as we came through, throwing a rooster tail of snow high into the air. They sure were something to marvel at. They still are.