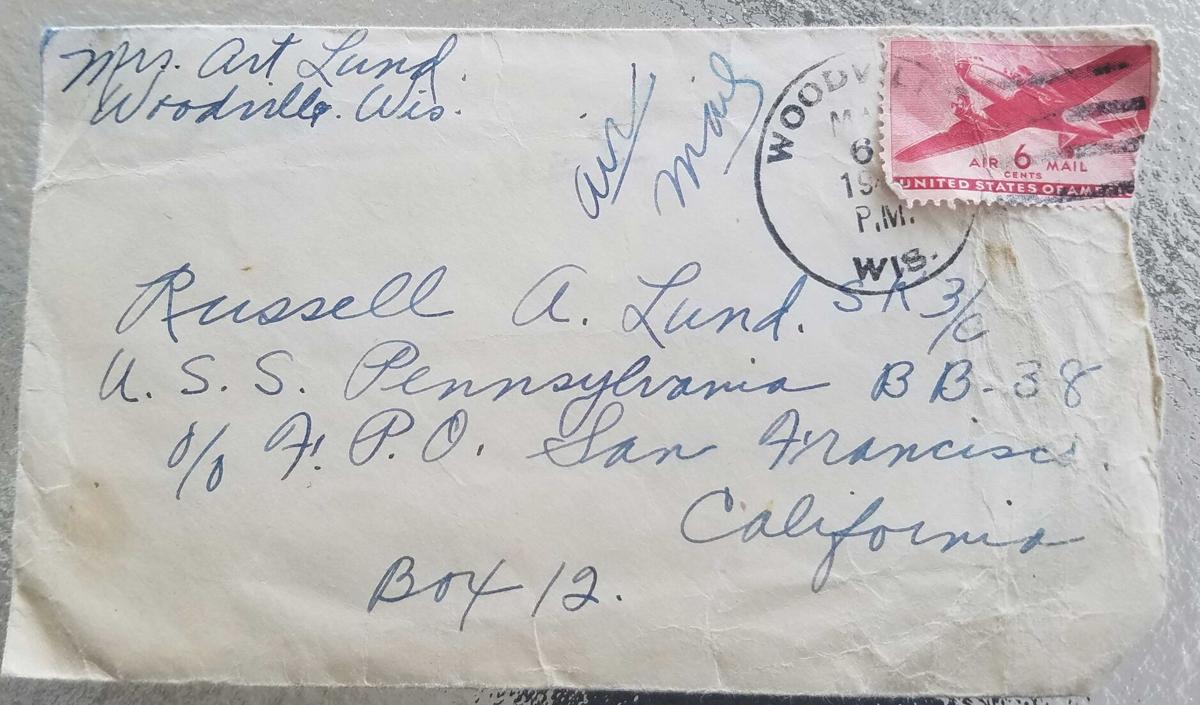 All of the letters, like the one shown above, were saved by his mother and are now kept by his wife, Lucille. 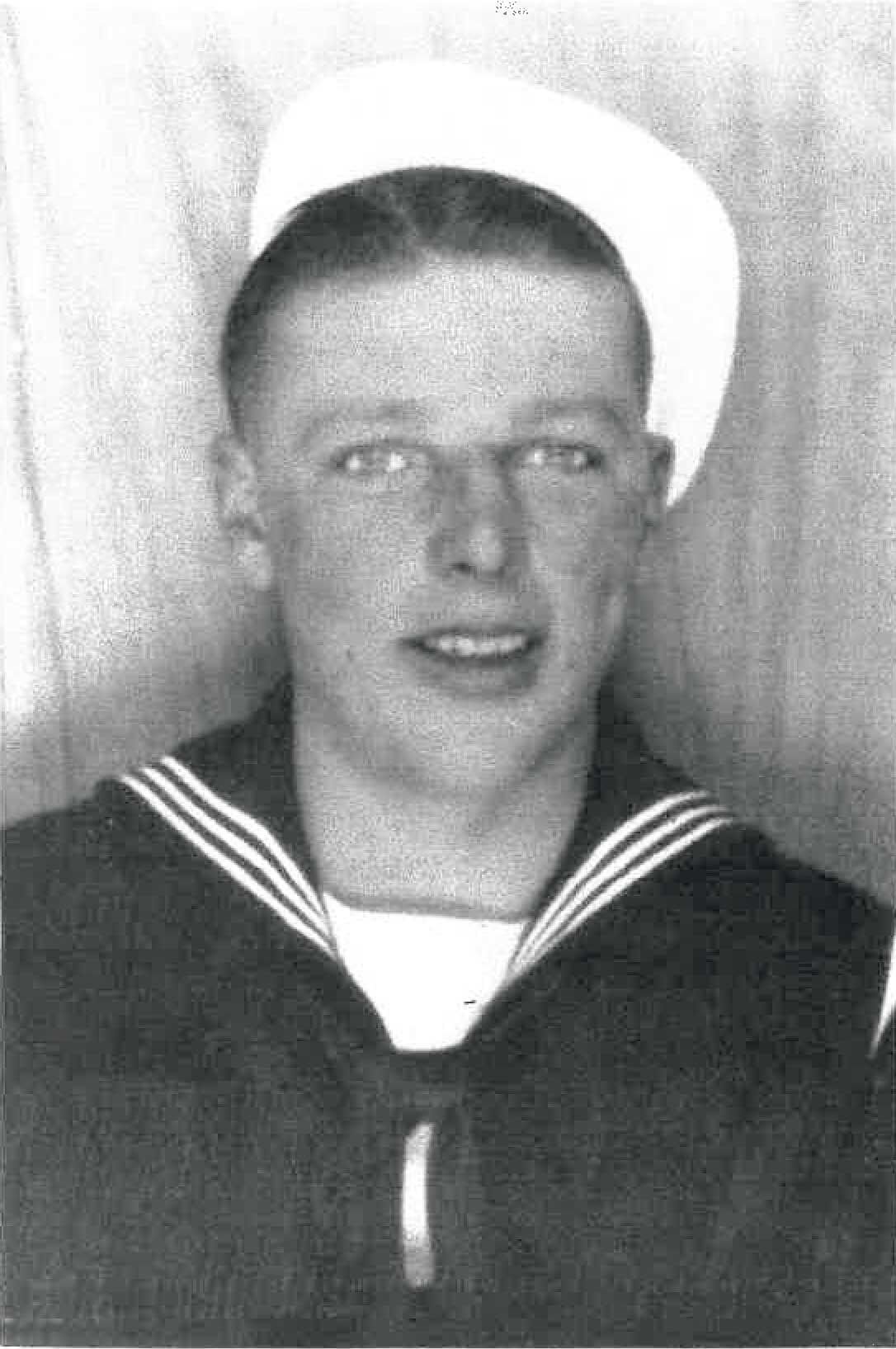 All of the letters, like the one shown above, were saved by his mother and are now kept by his wife, Lucille.

It can be said new people, new friends and a new environment make for a freshly paved path through the journey of life. Being the Editor of the Baldwin Bulletin has been a new journey for me and I feel thankful the path has led me to a new friend, Lucille Lund of Woodville.

Lucille first contacted me in July when she heard we were running a tribute to WWII veterans in an upcoming edition. Her late husband Russell was a WWII vet. I met up with Lucille on a breezy

summer day in Woodville where we chatted about Russell, a small town boy who took on the challenge of serving his nation.

Russell was born October 5, 1923 in Baldwin to Arthur and Irene Lund. He grew up on the family farm as one of six children.

He graduated from Baldwin High School with the Class of 1941. During his high school years, Russell worked for Sam Rosen’s grocery in Baldwin. He would drive into the cities and get products from the markets and bring them to be sold in Baldwin.

After being drafted and sent to Milwaukee, Russell went on to serve his country during WWII in the United States Navy aboard the battleship USS Pennsylvania (BB-38) as a storekeeper.

Lucille cannot believe it has been over 75 years since Russell returned home from WWII. She remembers him telling her about his first day in Milwaukee. “He said they put him through all kinds of tests. They put a big red ‘N’ on his chest and he asked what that was all about. They told him it meant he was being put into the Navy,” said Lucille.

After Milwaukee, Russell was sent to Farragut Naval Training Station, which was located in Northern Idaho. The base was named after David Farragut (1801–1870), the first admiral in the U.S. Navy and the leading naval officer during the Civil War. The site became Farragut State Park in 1966.

From Idaho he boarded the Pennsylvania, which was the lead ship of her Class of United States Navy “super dreadnought” battleships. During WWII, she participated in every major naval offensive in the Pacific, from Alaska to Okinawa.

Lucille said many people in the area communicated with Russell while he was away. “He wrote many, many letters,” she said.

He was not allowed to say where he was, but he would hide clues in his letters. One time he wrote, “I am going to wear ties when I get home. Ties and more ties.” This led his mother to figure out that he was on the island of Morotai.

The United States and Australian forces landed on the southwest corner of Morotai, a small island in the Netherlands East Indies (NEI), which the Allies needed as a base to support the liberation of the Philippines later that year. The invading forces greatly outnumbered the island’s Japanese defenders and secured their objectives in two weeks. Japanese reinforcements landed on the island between September and November, but lacked the supplies needed to effectively attack the Allied defensive perimeter. Intermittent fighting continued until the end of the war, with the Japanese troops suffering heavy loss of life from disease and starvation.

Morotai’s development into an Allied base began shortly after the landing, and two major airfields were ready for use in October. These and other base facilities played an important role in the Liberation of the Philippines during 1944 and 1945. Torpedo boats and aircraft based at Morotai also harassed Japanese positions in the NEI. The island’s base facilities were further expanded in 1945 to support the Australian-led Borneo Campaign, and Morotai remained an important logistical hub and command center until the Dutch reestablished their colonial rule in the NEI.

Russell returned home and he and Lucille married on August 6, 1954.

Lucille said she and Russell practically grew up together. She said he was always helpful to her father and her father really liked him. Lucille’s father taught Russell how to handle poultry and he went into the business of buying and selling poultry.

I wish I could have known Russell, it sounds like he was quite the guy. When it comes to getting a feel for the Baldwin-Woodville area, I feel like it was destiny that I met Lucille. I am pretty sure our visit was just the first of many. She said she and Russell were both always proud of where they grew up and made their life together. She said, “Woodville is a pretty good ol’ place and Baldwin too.”