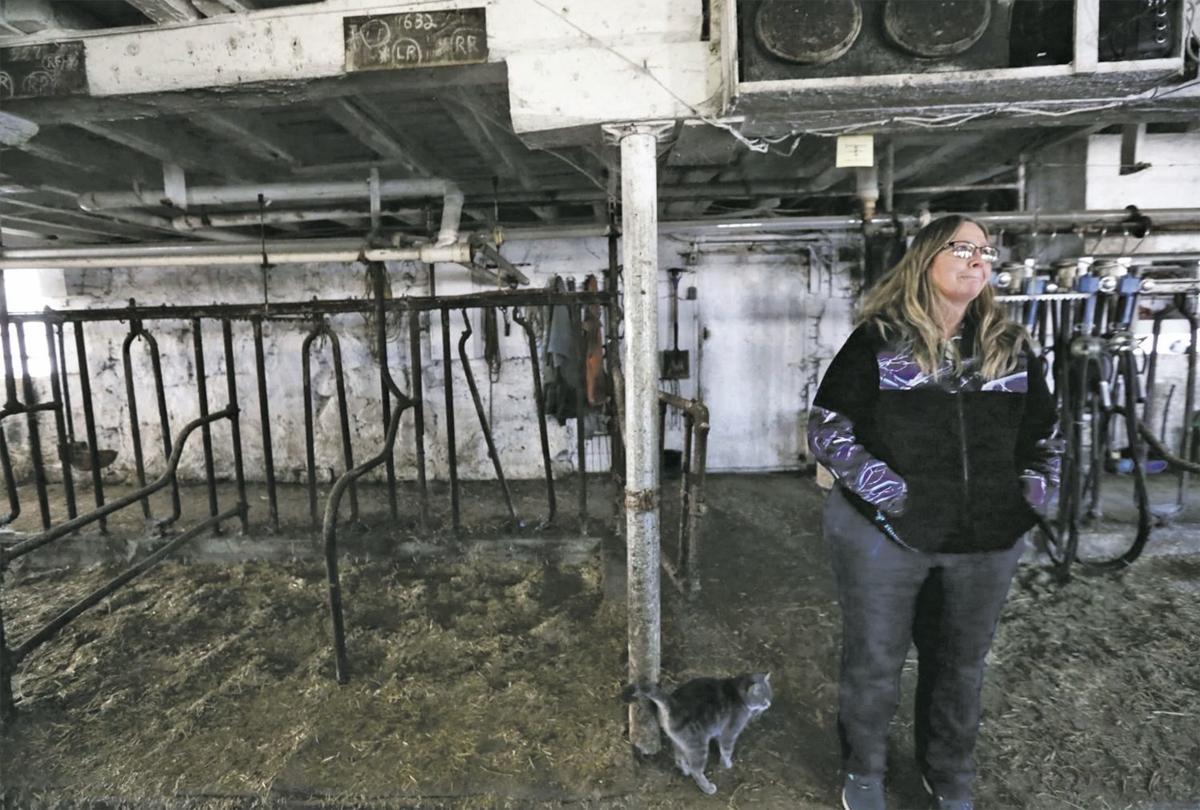 Brenda Statz, whose husband, Leon, killed himself in 2018, stands in a vacant milking parlor on their family farm near Loganville. She has channeled her grief into helping other farmers buffeted by difficulties to cope. 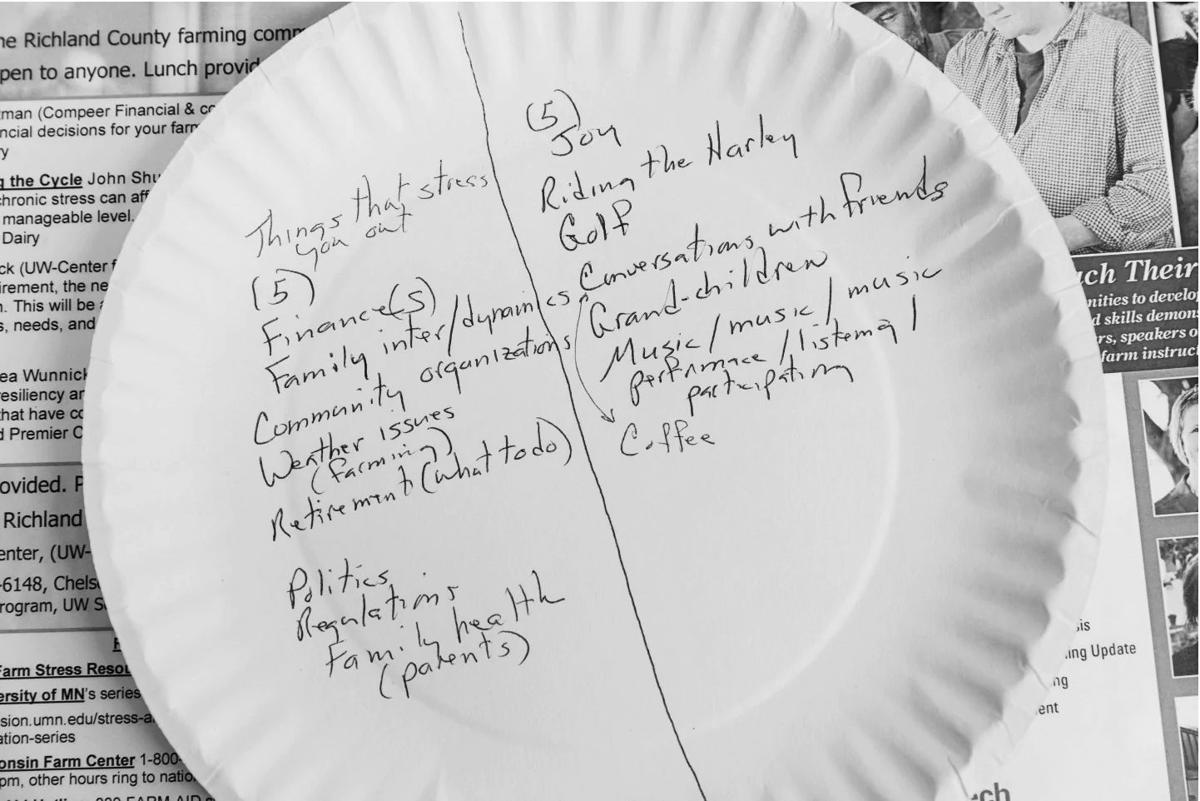 During the discussion, farmers list their joys and stresses on paper plates. Few lists are equal. 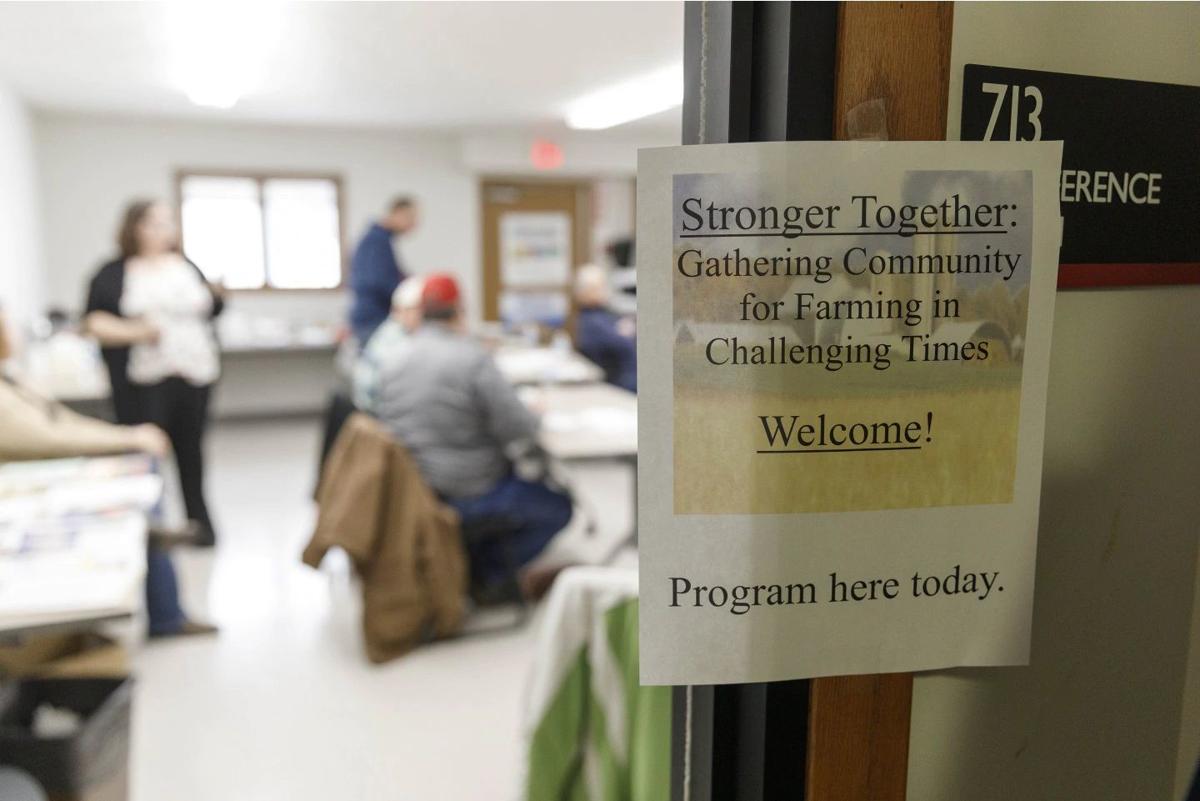 Brenda Statz, whose husband, Leon, killed himself in 2018, stands in a vacant milking parlor on their family farm near Loganville. She has channeled her grief into helping other farmers buffeted by difficulties to cope.

During the discussion, farmers list their joys and stresses on paper plates. Few lists are equal.

LOGANVILLE, Wis. — On what would have been Leon Statz’s 59th birthday, two dozen plaid-shirted farmers sat in the basement of St. Peter’s Lutheran Church to talk about how they were coping with the forces conspiring against them — the forces that had pushed their neighbor, a third-generation dairyman, to kill himself.

The gathering was therapy of the most urgent kind. Statz’s 2018 suicide was the first some of the farmers had ever experienced, and in the small community of Loganville, it was a tragic jolt. “He was stressed out,” remembers Dale Meyer, a close friend. “We tried to help, but we found that we didn’t know what we should have done.”

In the aftermath, though, Meyer and others came up with an answer. They created a unique self-preservation effort. The Farmer Angel Network, they named it.

And in a sign of how big the crisis is, the effort is growing. Though farmers throughout the country have faced stark times in recent years, the Dairy State’s plight has been the most severe by some measures. In 2019, its 48 farm bankruptcies led the nation. Many were in the Western District of Wisconsin, home to the Statz farm. The little guys keep taking it hardest: family-owned dairy operations, the kind traditionally passed from one generation to the next.

So, the Farmer Angel Network and similar offshoots are spreading into other communities in the state and bringing in outside resources, including social workers, agricultural educators, economic development consultants, pastors and more. At the same time, money is starting to flow from the federal and state governments.

Statewide, weekend sessions are being held this winter for farm couples to learn about dealing with stress and planning a future together. Starting in March, a series of town hall-style events will take place. Its theme: “Unexpected Tomorrows.”

They all are aimed at helping individuals who typically work alone, worry alone and tend to be stoic until the end.

“There’s a part of you that feels like you’ve completely failed,” says Terry Jindrick, who showed up for a “Stronger Together” event Tuesday on the University of Wisconsin’s satellite campus in rural Richland Center. It drew nearly a dozen farmers to a white-walled conference room, men and a few women with stolid faces who listened to a presentation about how to better respond to pressures and “breaking the cycle.” They were given paper plates and asked to write the joys in their lives on one half and the stresses on the other half. Stress outnumbered joy on most.

Their lists reflected the challenges farmers face throughout the upper Midwest: long-slumping prices, the debilitating consequences of more-extreme weather, President Trump’s trade tariffs. At 64, Jindrick also has other concerns.

“I’m the fifth generation, and I can’t get [my farm] to the sixth generation,” he said. Jindrick’s two children chose other careers after college, leaving him, his wife and elderly parents with few options. The farm has been in their family since 1855, only several years after Wisconsin became a state.

Yet, like their economic crisis, there’s no clear blueprint for how to solve farmers’ mental health crisis. Figures from the Centers for Disease Control and Prevention show the profession has a suicide rate double that of veterans and five times that of the general public.

“Farmers are very proud, and they’re very private, and there’s a lot of resistance to seeking mental health assistance,” said Chris Frakes, who since May has served as project director for farmer suicide prevention at the Southwestern Wisconsin Community Action Program. Her position at the nonprofit, which is based a half-hour west of Madison, is paid through a $50,000 grant from the University of Wisconsin School of Medicine and Public Health. Executive Director Wally Orzechowski applied for the funding after realizing the scope of the problem required extra resources.

“In my 16 years, it’s never been this bad,” Orzechowski said. One measure of that comes from state-issued vouchers available to farmers to visit mental health counselors. In 2016, just 31 vouchers were requested. By 2018, 89 farmers had asked for them. In the first half of 2019 — the most recent period available — the number reached 95.

Part of the legislature’s increased financial support will cover 250 vouchers this year.

One focus of Frakes’s work has been organizing events such as the one in Richland Center. Co-sponsored by the university’s extension service, they’re intended to bring farmers and their families together over lunch and then connect them with resources.

“I’m really trying to think about how do we put positive community events, positive messaging, to get stories out into communities where people can realize, ‘I’m not alone,’ ” she said. “It’s really okay to ask for help, and we can do this together. Our communities can figure this out.”

Yet it’s the informal conversation that many credit with saving lives. “Farmers need to talk to farmers,” explained Randy Roecker, who was at December’s meeting of the Farmer Angel Network.

Brenda Statz was there, too. It was solace to spend her husband’s birthday helping others avoid his fate, she said. She has shared his story repeatedly, recounting how protracted financial struggles contributed to anxiety and depression that Leon never got past despite psychiatric care and medications. His October 2018 suicide represented his third attempt in a year. One of their children found the body.

His name came up repeatedly during the more than two hours of talking over bean soup, ham sandwiches and homemade brownies. Retired dairy farmer Henry Elfers recalled driving Statz to psychiatric appointments in Madison, noting his friend’s humor and gentle nature, even on their last trip just before he took his life.

“I had no idea that he’d pass in a couple days,” Elfers said quietly, still shaken by the memory.

Steven Rynkowski opened up about overdosing on Tylenol and alcohol on a night in 2003 that he only vaguely remembers. His financial struggles had felt crushing. After he recovered, he said, he found peace singing in his church choir. He ultimately sold his cows and land.

“This is the first time I’ve shared my story,” he told everyone. “There is life past farming.”

Roecker admitted that Statz’s death had reminded him of the desperation he’d felt a decade earlier, when the Great Recession plunged him millions of dollars into debt shortly after he’d made a huge investment in equipment and processes to modernize his dairy operation.

Looking out over the group, he applauded their collective effort to save each other. “I’m proud of what we’ve done as a community,” Roecker said.

Brenda Statz, sitting at a lunch table, agreed. She has stayed on the family’s 200-acre farm, persevering despite a health crisis with one son. She and the kids had harvested the last of the beans the day before the Farmer Angel meeting. They’d need another week to finish with all the corn.

“We’re going to keep the farm going,” she says. “It’s what Leon would have wanted. You can’t just walk away.”

How to keep your car on the road longer

Building credit at 18: Tips for a solid financial foundation

Tips for living your best life with hand tremor