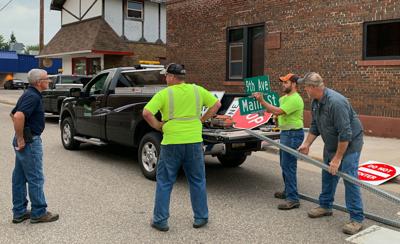 Due to swift pushback from business owners on Main Street and Baldwin residents, The Village of Baldwin has effectively decided to reverse a decision made at the August 14 board meeting that made 9th Avenue a one way heading south. The change back to the original one way north direction was made effective on Wednesday, September 18.

“The committee should have contacted business owners on 9th Ave. prior to bringing it to us,” said trustee Lisa Knutson, “it’s our fault as the board for not questioning that.” The original decision on August 14 was made in response to drivers accidentally turning onto Main Street during events like Chili Fest or June Bug Days when the road was closed without a proper way out and to deter drivers from taking private drives behind businesses on Main Street. After the decision, the pushback began immediately.

“You just took three blocks of Main Street away.” Said Baldwin Police Chief Darren Krueger after the vote, “Nobody going westbound is going to use that. Now it’s only going to affect that one block. Ultimately, changing it that direction – all that did was take care of Main Street when the road is closed and that’s why we started closing it at HWY 63. It’s going to make things really difficult.”

Once the change had been made, many residents and business owners reached out to the Village of Baldwin to express their concerns. Many were related to parking and safety issues for the neighboring businesses like the St. Croix Valley Dance Academy who expressed concern for their students in an email to the Village Board.

“I want letters, or for someone to go to each business and say the board is reversing the decision due to safety factors and multiple complaints,” said Trustee Matt Knegendorf, “at least then they can tell their customers and employees that the change is taking place.”

Once the businesses had been properly notified, the Village of Baldwin Public Works stopped by 9th Avenue on Wednesday, September 19 and changed the signs back to the original direction. Those driving to and from Main Street can expect things to be as they were on 9th Avenue as of this time.

Tips to get your house ready for entertaining

Red, white and sparkling: How to choose the right wine glass