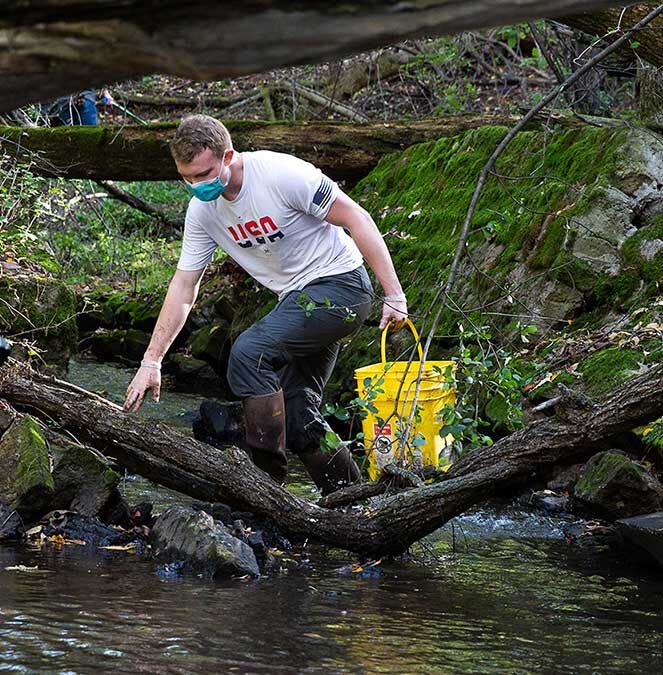 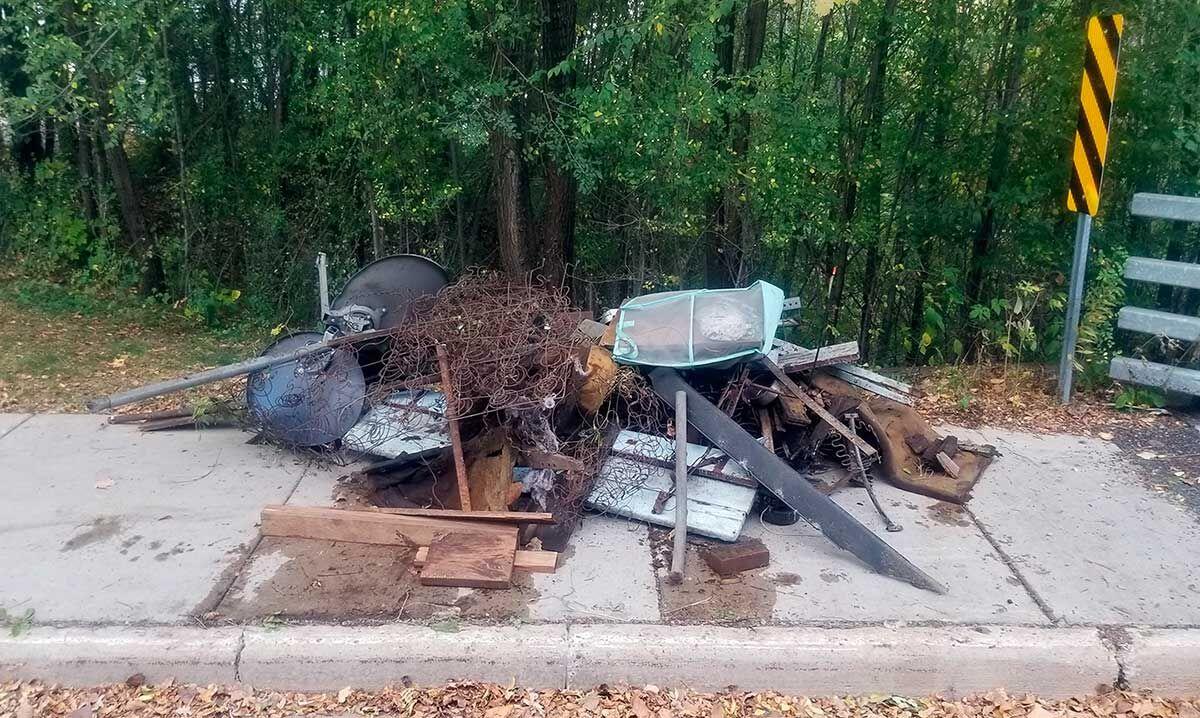 Large objects, including metal fire pits, a box spring, a couch and boards were pulled Oct. 1 from Galloway Creek on the south side of Menomonie by a group of UW-Stout students.

Large objects, including metal fire pits, a box spring, a couch and boards were pulled Oct. 1 from Galloway Creek on the south side of Menomonie by a group of UW-Stout students.

Twisted wire from a box spring. The remains of a couch. Several metal fire pits. Rotted boards and wood. A table. Plastic bottles and aluminum cans.

All that and more, estimated at several tons of garbage, was pulled out along Galloway Creek in Menomonie on Oct. 1 by about a dozen University of Wisconsin-Stout students.

Wearing masks and gloves and carrying bags, they were surprised by what they found in a few hours while covering just a quarter-mile of stream and its steep banks south of campus.

“We didn’t exactly know what to expect. In some regards, you could never imagine this,” said Chris Jones, of Racine, a senior environmental science major.

Jones is president of the student Natural Areas Club, which organized the event. Students worked between Third and Fifth streets near where Broadway Street crosses the creek.

Galloway Creek flows through the city’s south side and empties into the nearby Red Cedar River.

The amount of refuse they found was disappointing, Jones said. The students were then disheartened when they also found about a dozen dead Canadian geese next to the creek.

Jones didn’t know how the geese died or if the deaths were related to the water quality or other aspects of the pollution they saw.

He said the water quality wasn’t great. “You could see oil in the water,” he said.

Students also found a debris dam. A table in the stream snagged other items and was blocking water flow. Students pulled out the table and broke up the blockage.

The parts of a couch that they found were waterlogged and weighed several hundred pounds apiece, making it hard work to carry the parts up the steep banks, Jones said.

“You could see visibly how much cleaner it was when we were done. Every piece of trash we removed was a step in the right direction,” Jones said. “Everybody was feeling good when we left, like we were hometown superheroes saving things.”

Assistant Professor Keith Gilland suggested the cleanup to the club and provided tools, gloves and trash bags. He also helped the students.

The club worked with Menomonie Public Works Director Randy Eide to have the trash from the creek either be recycled or taken to the dump.

“This was an awesome project,” Eide said. “All urban creeks need some tender care. Galloway creek is no exception, and the problem is compounded because a good portion of the creek is hidden behind homes and is adjacent to private property.”

UW-Stout students have worked on the creek over the years, led by instructor Krista James, who recently retired.

“It is good to see UW-Stout come back to Galloway Creek and keep up the cleaning effort. The residents and other students will see this and will hopefully be encouraged to keep the creek clean in the future,” Eide said.

The Natural Areas Club hopes to hold another cleanup on the creek yet this fall. Last year, it cleaned up in and around the Devil’s Punch Bowl rock formation along the Red Cedar River, removing many other large items.

Most students in the club are environmental science majors, but many of them taking part in the Oct. 1 cleanup were just concerned students from other majors, including psychology; business administration; and applied mathematics and computer science, Jones said.

The goal of the club is to “promote a world that doesn’t need protection” because everyone is taking care of it, he said.

Along with the environmental science major, UW-Stout offers a minor in environmental health and a master’s in sustainable management. The university’s Sustainability Office works to educate students, faculty and staff about issues and to implement campus wide initiatives.