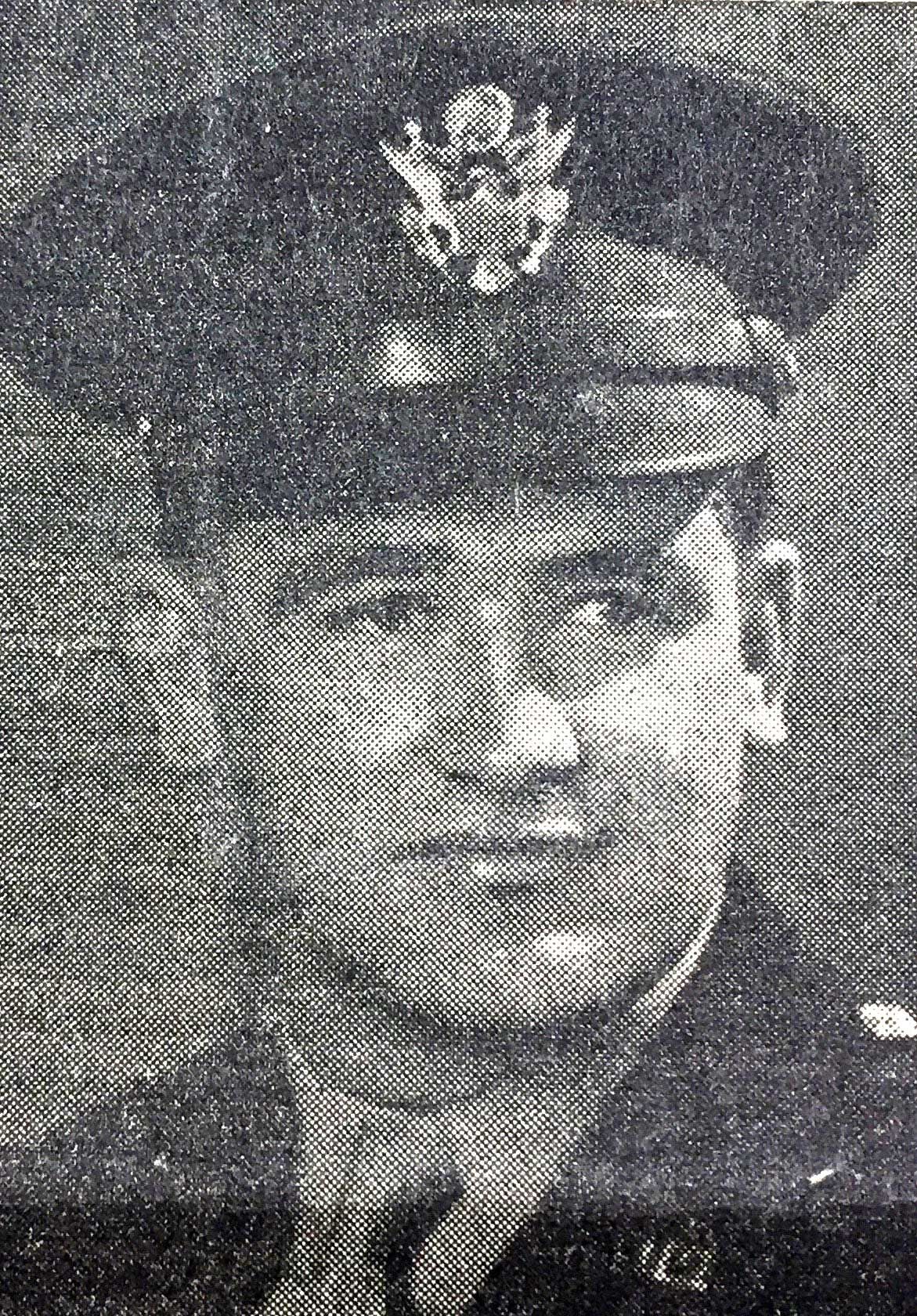 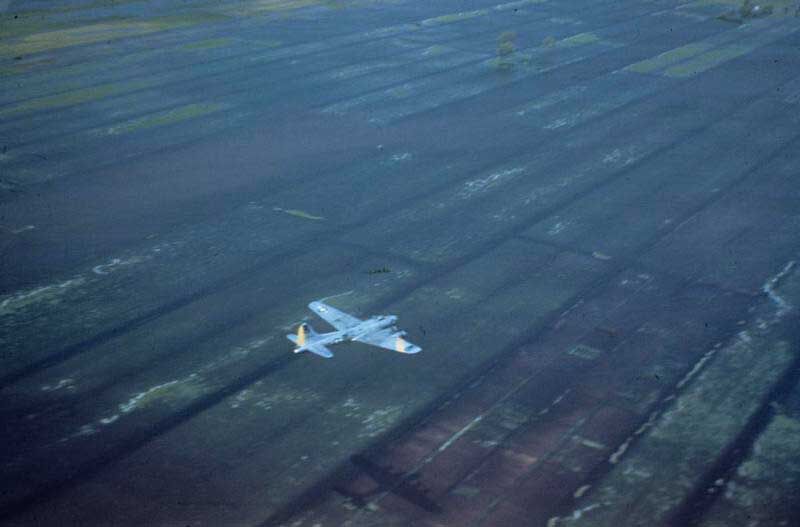 A B-17 Flying Fortress of the 390th Bomber Group flies low over the dutch countryside in May 1945. 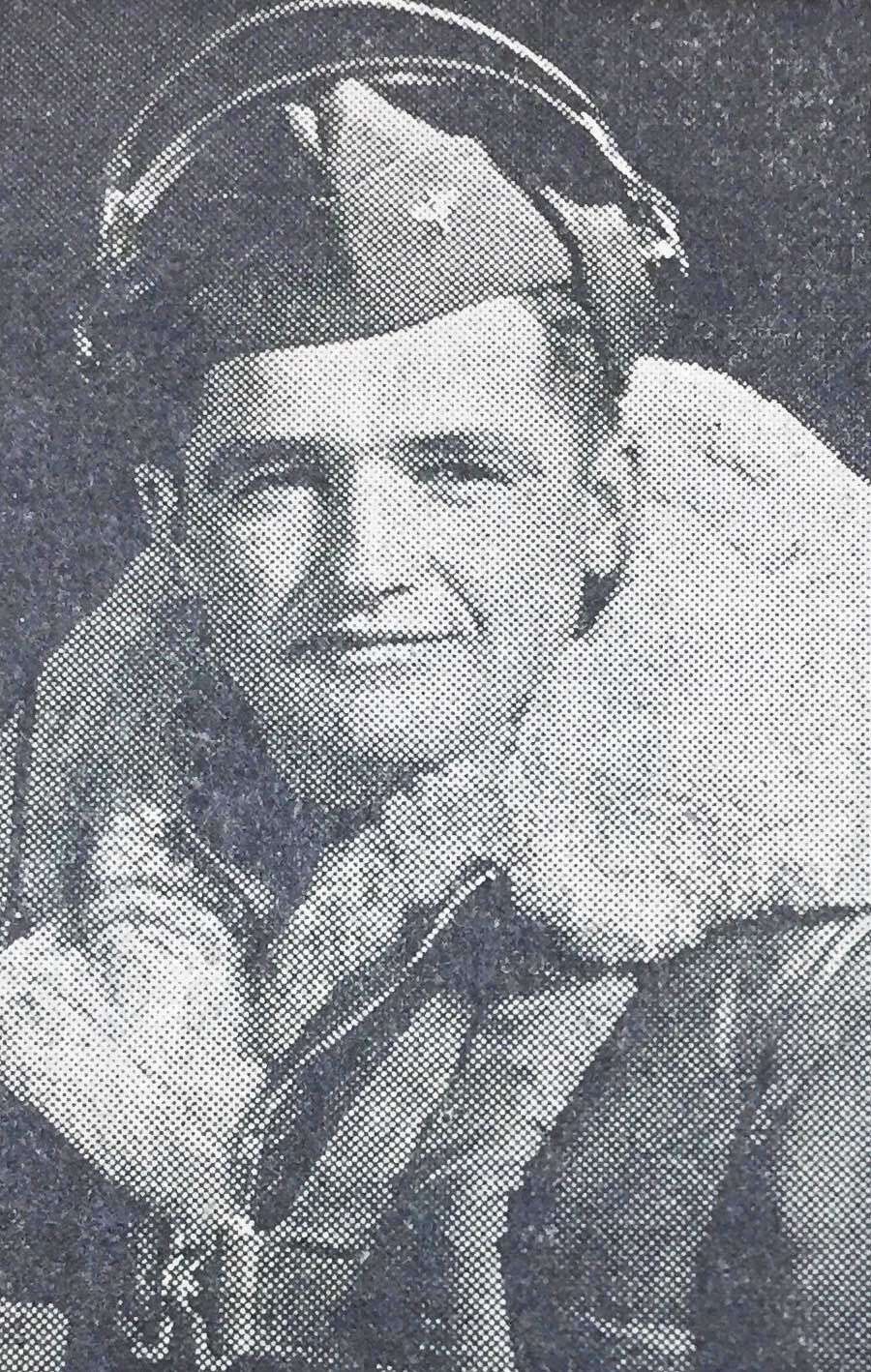 A B-17 Flying Fortress of the 390th Bomber Group flies low over the dutch countryside in May 1945.

There are two photographs of Peter Stene Jr. in the Baldwin Bulletin’s archives.

The first was taken stateside sometime in 1942-43 and shows Stene in his officers dress uniform with a broad-rimmed, bus driver style cap. He has a wide jaw with a very prominent chin and chubby cheeks that make him look like a high school senior, rather than the 25-year-old teacher he was.

The second photo was most certainly taken while Stene was stationed in England with the 8th Air Force, flying combat missions over Germany. In this photo he’s wearing his fur lined bomber jacket and parachute harness, with an officers overseas cap cocked just ever-so-slightly to the right and his radio headphones on top. His eyes are thin and he has an almost downturned smile with hard lines on either side. The weight is gone from his face. He looks 15 years older than he did a year before. This second photo is accompanied by the headline “Missing in Action,” and a short story that reveals almost nothing about the Baldwin native’s final mission 25,000 feet above Western Europe.

Stene was born in in Alema, Wisc. on December 6, 1918. He was desperately outnumbered as one of only two boys in a family of ten children. His

parents Beatrice and Peter Sr. raised their family in the Alema area and Peter attended Baldwin High School for one year before transferring to Woodville High, where he graduated in 1936. In the spring of 1940, Peter earned a Bachelor of Science degree from River Falls State Teachers College and spent a year teaching school in Minong before enlisting.

Preempting the start of the war, Peter joined the Army Air Corps in June 1941. As a college graduate he would have been at the top of the list to become an officer, and something about his smile says he was perfectly suited to become a pilot. He had the kind of easy going good looks that says “I know just how cool I really am” without actually saying anything. If he’d have popped a lit cigarette in the corner of his mouth before those photos were taken, they could’ve passed as Hollywood headshots.

Stene completed basic training at McChord Field in Washington before being sent to Illinois for weather observation training. He earned his wings at Victorville, Calif. on November 25, 1942. It’s a general rule that all aspiring pilots during the war wanted to fly fighters. Mustangs and Thunderbolts and Wildcats ruled the roost and sucked up all the attention, but the choice was almost never left up to the recruits themselves. Following flight school, Stene was assigned to advanced training on four engine bombers, specifically the B-17 flying fortress.

He served as an instructor on the B-17 for nearly two years before finally getting his chance to head overseas. When he was assigned to the 390th Bomb Group in September 1944 he would have certainly been one of their most experienced pilots who had not yet seen combat.

By the fall of 1944 the German Luftwaffe was mostly nonexistent, with the 8th Air Force and other allied bomber groups pounding the heart of the German empire nonstop every day and night. Stene’s 390th Bomb Group took part in dozens of daytime raids during that time, to both support the infantry advance on the ground and destroy strategic targets in Germany.

Flying out of Framlingham Airfield on the eastern coast of England, Stene took off in the early morning hours of February 17, 1945, headed for Frankfurt, Germany. Frankfurt am Main had been a major target of allied bombing since the air war in Europe began. The 8th Air Force alone dropped 12,197 tons of explosives on the city and allied bombing throughout the war killed more than 5,000 residents of Frankfurt.

Stene and the 390th’s goal that morning was to destroy synthetic oil plants in the Frankfurt marshaling yards. His B-17 was one of 895 bombers that were dispatched to bomb the city that day, along with 183 fighters for air cover.

Weather was exceptionally poor after takeoff and over half the planes were recalled before reaching their target. The weather was so bad that the controls froze up on some of the remaining planes and they were forced to drop their bombs prematurely and return to base.

Stene and his crew made it through the weather and continued on to their bomb run. At some point during the run, Stene’s Flying Fortress was hit by flack, damaging the number one and number two engines. They were nearly 400 miles from their base in England, with poor weather conditions between them and safety and half their engines damaged. They turned northwest and began to limp home.

The 8th Air Force’s casualties were incredibly high during the war. They experienced a kind of helpless horror, trapped in a metal box for sometimes 12 hours on end, defenseless against the German flack guns below. Each time a plane went down, 10 men were lost. The division suffered over 47,000 causalities throughout the war, with 26,000 of those being killed in action.

But, while infantrymen and other combat troops endured almost constant misery, the lives of B-17 crews were bi-polar. When they left the runway on each mission they entered one of the most dangerous arenas of the war, as full of terror and death as any ground combat. But if they survived, they returned to the relative safety of base where they slept on mattresses and ate hot meals. No other branch of the service witnessed war as close and personal while simultaneously living so far behind the frontlines, and this relative safety was what Stene was racing back to in the early afternoon of Feb. 17.

They crossed out of Germany and were passing over Holland just before 2 p.m. when a fire started in the damaged engines. At 2:25 p.m., 20 miles northwest of Ostend, Holland, both engines exploded and Stene’s Flying Fortress plummeted into the English Channel — They were 80 miles from their base.

Two weeks later on Sunday, March 4, 1945, a telegram was delivered to Beatrice Stene in Baldwin, informing her that Peter was missing. A month later, a letter was published in the Bulletin that offered a glimpse of hope. Beatrice and Peter Sr. had received word that four parachutes had been seen descending away from the plane as it lost altitude and that while no further information was available at the time, a search was ongoing for survivors.

But no news followed and Peter remained missing in action. One year later on Feb. 16, 1946, the Stene’s received an official notification that Peter had been listed as killed in action. Only one member of his crew was rescued from the channel.

The photo of Stene taken in England is hard to forget once you know his story. The picture exudes strength and confidence, but his face also holds a level of sadness unseen in the photo taken before he went overseas. The change is striking, and is a reminder of the toll the war took on every man who witnessed its horrors — both those who came home and those who paid the ultimate price.